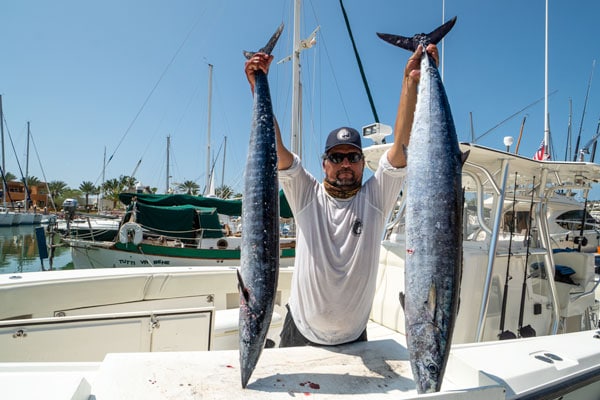 So long September, as we say goodbye to the hottest most humid month of the year the fishing seems to be heating up. Just last week I talked about how this year just wasn’t living up to our normal expectations. The water conditions were challenging all season the winds wouldn’t die down and the fish just wouldn’t settle in. Well as October rolls in, the month I consider the best of all, the water is incredible, the temperature is 86 degrees and the wind is gone. I don’t want to say the bite is wide open but, the signs are very encouraging.

Starting with the striped Marlin, they have been around but very inconsistent on the chew. Now their eating anything in their path live bait, lures it doesn’t matter.El Charro has strippers stacked up in the 120-150 lb class. Punta norte has a wide open wahoo bite going on. Purple Marauders, skirted ballyhoos are the ticket. The bite is on the rising tide which at the time I’m writing this is early morning, slack high is at 9:30am Check your charts or ask your captain.

We had fish hitting lures that were just sitting in the water waiting to be cleared after a hookup, crazy stuff. Not much has changed with the Dorado front they are everywhere. Most of the fish are small in the 10 pound range but, if you find the shark buoys that haven’t been fished that day they are holding bulls in the 30-40 lb range.

The ridge between the North end of Cerralvo and La Reina are holding Tuna we are picking them up on our sonar but not having much luck on getting them to come up. Something is holding them around 80 feet, perhaps a food source like red crabs or calamar. The local pangueros are picking up couple a day but nothing consistent. Perhaps any day now they will start to cooperate. These guys are 40-80 lbs so if you decide to go after them come prepared. You don’t get many chances so 60 lb main line with 50 lb fluoroCarbon is a must.

The spearos are having a hay day on the wahoo. After the tide changes and the fish go off the bite but they are still around and not moving much. Easy pickings for the folks that rather shoot then catch. 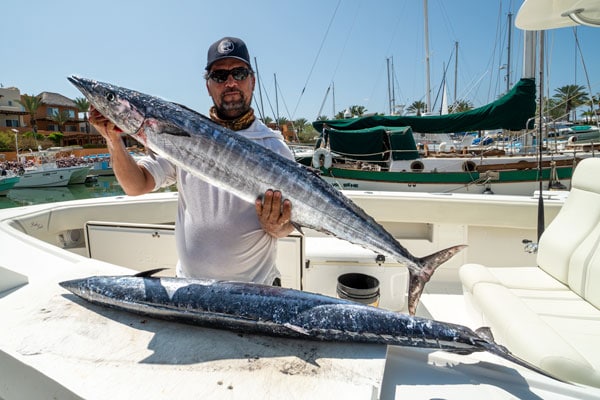 Anyway it looks like things are coming around and fall may be exactly what we were waiting for, just like the new direct flight to La Paz from the states, precisely from Dallas Fortworth Intl Airport starting Dec 19th. This should make a lot of things easier for a lot of travelers as the new normal begins to settle in and allow for more travel.

We have a full load next week so hopefully we can validate what we’re seeing with a lot more friends in the water, until then, we say So Long September !